Yard sales have been a part of American culture dating back to the mid-19th century, and whether buying or selling, the adage: “one person’s trash is another person’s treasure” is a strongly held belief by many.

At a recent yard sale in the central Adirondacks, I was examining an assortment of old shovels, axes, and rakes when an unusual hand tool caught my eye. The homeowner, an affable 20-something, said it belonged to his late father.  The weathered gray handle was about four feet long and attached at the end was a rusty spear and hook combination. Engraved in the handle were the words, “Met Life Ins. Co. Sanatorium”.  I bought it for $10 thinking there might be a story behind it; and there was. 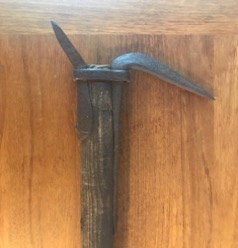 A sanatorium is a facility for the treatment of people infected with a long-term illness, especially tuberculosis (TB). TB, also referred to as “consumption”, is a potentially life-threatening, highly-contagious bacterial infection. This deadly disease primarily attacks the lungs and is transmitted through respiratory fluids generally emitted through sneezing and coughing.

Sanatoriums were first built in Europe in the early 1860s to both treat and quarantine patients. Construction of sanatoriums in certain regions in the U.S. began after 1885. The Metropolitan Life Insurance Co. (MetLife) was founded in 1868 in New York City. Like other major U.S. cities in the early 20th century, New York swelled in population. Diseases such as tuberculosis thrived in the congested streets and tenements of the growing metropolis, and MetLife employees were not immune. 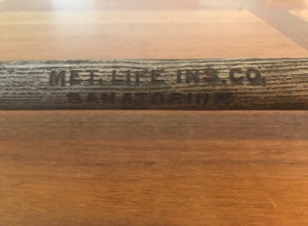 When the number of employees diagnosed with the infection rose, MetLife officials took decisive and compassionate action. The company bought a mountaintop in Wilton, New York just north of historic Saratoga Springs that was once the site of a resort. In 1909, plans were made to build a sanatorium exclusively for its workers. Not only did the company build the facility and pay all medical expenses, it even continued to pay the employees’ salaries. In 1914, the first TB patient entered the MetLife Sanatorium atop scenic Mount McGregor. A New York Times article, dated June 21, 1914, declared the facility “the first of its kind established by an insurance company.” Dr. S. Adolphus Knopf who suggested the idea to the company, was likely influenced by a sanatorium built three decades before and about 100 miles to the north.

A New York City physician and tuberculosis sufferer named Edward Livingston Trudeau, the great-grandfather of cartoonist Garry Trudeau creator “Doonesbury”, went to the Paul Smith’s Hotel above Lake Placid to pass his final days in the familiar landscape. In this remote land of lakes and mountains, Trudeau experienced, what some would consider, a miraculous recovery. Dr. Trudeau called himself “a patient of the Adirondacks” when he wrote, “...the stimulus of renewed hope, and the constant open-air life had a wonderful effect on my health. I soon began to eat and sleep and lost my fever.”

In 1884, Dr. Trudeau was so convinced of the benefits of clean mountain air that he established the Adirondack Cottage Sanitorium and research lab in Saranac Lake, New York which would serve as the precursor for treatment facilities across the nation, including the one on Mount McGregor. Trudeau left the city to die on his own terms, but instead, lived on to become a prominent figure in the fight against tuberculosis. Although the sanatorium closed in 1954, Trudeau’s groundbreaking work on the treatment of infectious diseases continues today at the Trudeau Institute.

So what is the purpose of the unusual tool with “Met Life Ins Co. Sanatorium” embossed on the handle? 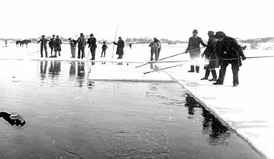 thick blocks of ice cut from nearby frozen lakes on the sanatorium property. In northern states, ice harvesting was a highly profitable business. Lake ice was sawed into sections and used to preserve perishable food in “ice boxes” before the advent of the refrigerator. (Watch the beginning Disney’s animated movie “Frozen” to see ice harvesting in action.) This particular ice hook (circa 1900) was made by the Gifford-Wood, Co. in Hudson, New York. It’s unclear when ice boxes were replaced by electric refrigerators at the sanatorium, but they were available in homes as early as 1913.

How an ice hook dating back to the early 20th century ended up at a yard sale 100 years later remains a mystery, but the $10 antique harvested a local history lesson about a bygone industry, a virulent disease and the life-saving investment by an altruistic life insurance company. 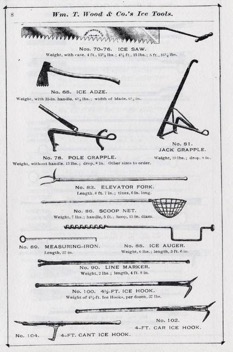 After treating thousands of patients, the MetLife Sanatorium at Mount McGregor closed in 1945, but the buildings and grounds were repurposed as a temporary home for veterans returning from war. In 1960, New York State transformed the property into a school for the developmentally disabled until 1976 when it became a minimum (and later a medium) security prison. The contentious closing of the prison occurred in 2014. Today, the 1200-acre parcel is for sale, but no offers are pending. Perhaps it’s time for nature to reclaim the storied mountain top. 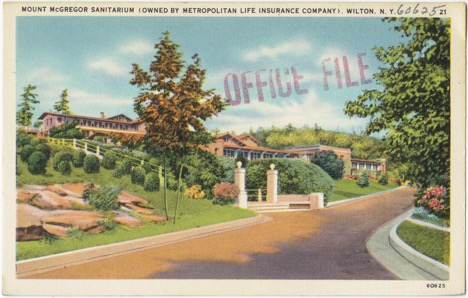 Postscript: In my research, I encountered multiple spellings of “sanatorium.” To be consistent, I have used one spelling in this article with the exception of when the word is used in the namingof institutions. Here is a link for clarification:
http://www.differencebetween.net/science/health/difference-between-sanitarium-and-sanitorium/

Pat Gormley is a high school teacher, writer and illustrator who has been exploring the Adirondacks by foot and boat since his boyhood in Ballston Spa. He designed a course known as Adirondack Literature and taught it at Queensbury High School in Upstate New York for 16 years. He is a graduate of SUNY Cortland and Canisius College with degrees in communications, education and fine art. Now he is passing his love of the Adirondacks onto his two sons, Liam and Aiden.