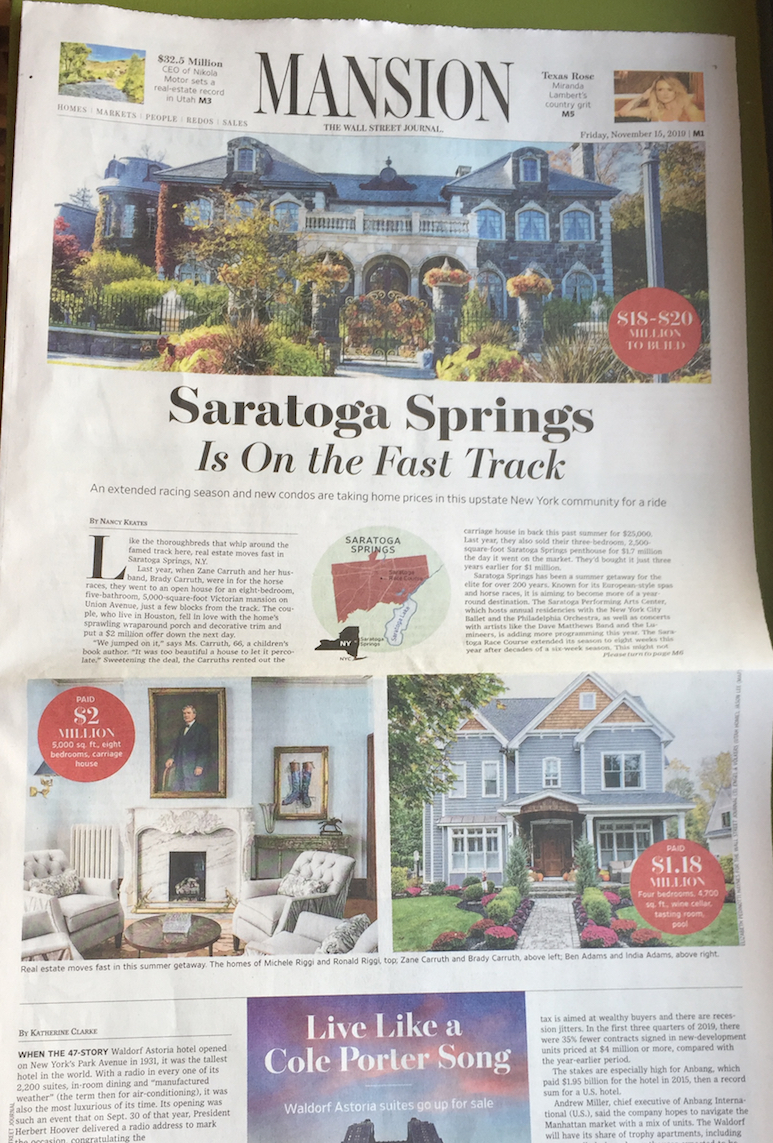 NATIONAL SUN ON SARATOGA: The Wall Street Journal gives Saratoga Springs’ hot real estate market a spectacular coast-to-coast splash. Despite five new downtown condominium projects, home prices are still rising, up 29% this September over last, and there’s no sign of a slowdown. “It’s everyone’s dream to land here,” says Michelle Riggi. “It’s like being on vacation all the time,” says another homeowner. http://bit.ly/WSJPromosSaratogaSprings

PUTTING THE HOT BACK IN HOTELS: Two 1920s-era hotels are catalyzing the revitalization of their Upstate New York communities. In Glens Falls, the landmark Queensbury Hotel in its heyday played host to Guy Lombardo, Benny Goodman, Louis Armstrong, Bob Dylan, Kenny Rogers, Bob Hope, Ozzy Osbourne, Ronald Reagan and Robert F. Kennedy. But its heyday was a distant memory until entrepreneur Ed Moore came along three years ago. He and his team have restored the elegance, modernized the amenities, and amped up the food and service. In Saranac Lake, hard times left so many burned-out lights in its roof-top neon sign that the venerable Hotel Saranac was comically reduced to HOT SARA. Now, after a $35-mllion, four-year renovation, the Boston Globe says Hot Sara is back – and hotter than ever.

TIME FOR YOUR BATH: First, inhale the aroma. The pine. The balsam. Is that a touch of moss on the nose? Gently cup your hands forward over your ears; make those wiggly little deer ears. Do you hear those sounds? Those are the sounds of a forest. Now, breathe in the healing phytoncides. You’re Forest Bathing, the meditative, back-to-nature, next-gen zen-inducing update on old-school tree hugging pioneered by the Japanese to make you feel more peaceful, less stressed, more upbeat and relaxed while completely clothed. Maybe it will improve your health, too. Yoga? Yesterday.  Time for a dip in the Adirondacks life. http://bit.ly/BathingInTheForest

TURN THE CAR AROUND: Cynical conventional wisdom says big cities are the future and the decline of small towns is irreversible. A family foundation in Vermont has decided to take the road less traveled. It’s helping small communities rediscover their heart and soul, finding ways to engage young people and the resources the money to invest in infrastructure and broadband.  http://bit.ly/RevitalizingSmallTowns

STOPPING BY THE WOODS: On the darkest evening of the year, Robert Frost paused between the woods and a frozen lake just to watch the woods fill up with snow. You can do the same this winter with a silent sleigh ride by lantern light at the oldest operating lodge in the Adirondacks. http://bit.ly/LanternSleighRide

THE WURST BRATS: Beck’s Tavern in North Creek, Pumpernickel’s in Bolton, the Heidelberg in Queensbury, Wolff’s Biergarten in Albany and Syracuse, the Flammerie in Kinderhook and Muza in Troy make Yelp’s list of the top German restaurants in Upstate New York. http://bit.ly/UpstatesBestGermanRestaurants

FASHIONABLY PAST THE EXPIRATION DATE: They’re sliding craft brews and pub food across the bar at a stone military barracks where U.S. Grant imbibed; smoking barbecue in a 135-year-old hardware store; offering gourmet fare in an Irish castle and upscale Mexican in an Underground Railroad church. Welcome to the emerging food scene in historic venues across Upstate New York. http://bit.ly/HistoricVenueRestaurants

JUST RIGHT: Norwegian Cruise Lines is one of the world’s largest. Its business depends on the health of the high seas, and it’s trying to eliminate the use of single-serving, plastic water bottles by Jan 1. For a solution, they’ve turned to Will and Jaden Smith’s JUST Water of Glens Falls. http://bit.ly/CruiseLinePartnersWithJUST

SOMETHING’S WORKIN’ ON THE RAILROAD: This got way too little attention, but Amtrak just had the best financial performance in its history. Its new CEO, from the airline industry, may be putting the train back on the tracks. Ridership is up, revenues, too. All aboard? http://bit.ly/AmtrakMakingMoney

ANY LUCK WITH THE IRISH? When Norwegian Airlines began offering discount non-stop flights to the UK and Ireland from the Hudson Valley’s Stewart Airport, business soared. But Norwegian relied on the Boeing’s grounded 737 Max and now it’s history in Newburgh. So, Stewart officials are courting Aer Lingus. May the road rise to meet them. http://bit.ly/StewartAirportLooksToAerLingus 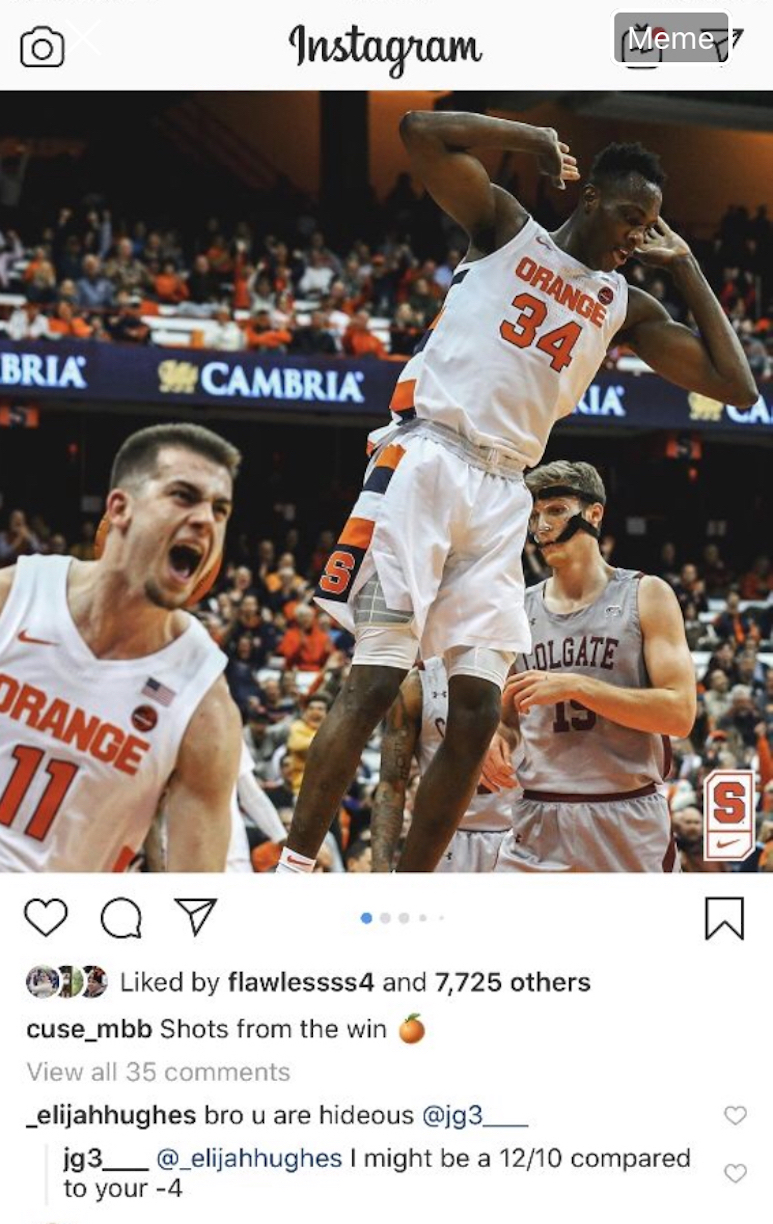 HIS TIME: Move over, The Notorious RBG. Meet The Hideous JG3. A new era of Syracuse basketball has officially begun. http://bit.ly/SyracuseJG3EraBegins

HER TIME: TIME debuts its Next 100 list, spotlighting leaders the magazine believes will transform America in the years ahead, and includes Congress Member Elise Stefanik. Former House Speaker Paul Ryan says: “Elise isn’t just the future of the Republican Party. She is the future of hopeful, aspirational politics in America.” http://bit.ly/EliseStefanikNamedToNext100

CALL TO 157 MANNING BLVD: The public may have forgotten the gruesome crime, but the mother and six children who bore witness to the unspeakably violent killing of an Albany policeman inside their home never did. Albany Times Union columnist Chris Churchill recounts the 1964 incident in a leafy neighborhood that terrified the city. http://bit.ly/RecallingAPolicemansMurder

TO CARE FOR HIM WHO SHALL HAVE BORNE THE BATTLE: Timothy Fowl gave up six years of his life to serve as a medical specialist in the U.S. Army. After he left the service, he worked as a welder but life intervened. He fell on hard times and, at the time of his death, Mr. Fowl was homeless – a forgotten, homeless Army veteran. That’s where the eight varsity basketball players at Catholic Memorial School in West Roxbury, Mass., stepped in to ensure Mr. Fowl got the final respect he deserved. http://bit.ly/FuneralForAHomelessVet

WHAT’S UP WITH WANG? We generally skip partisan politics here, but it is interesting to watch Andrew Wang, a GE/IBM kid who spent his childhood in Schenectady and the Hudson Valley and is now running for president on the MATH slogan: Make America Think Harder. He’s a serial entrepreneur and founder of Venture for America which raises money to create jobs in distressed U.S. cities. He’s proposing a “freedom dividend” of $1,000 a month income for all Americans. Though still polling in the single digits, he’s climbing in the race for money, having raised $10 million for his campaign this summer.

MASTER BRAYDEN: Queensbury’s Brayden Dock is headed to Augusta, if he can take time away from his eighth grade studies. He is one of only 80 kids nationwide invited to the national Drive, Putt and Chip championship at the storied home of the Masters.  http://bit.ly/YoungAreaGolferHeadsToAugusta

TO WHOM IT MAY CONCERN: How you’re addressing those holiday cards may send the most important message of all. http://bit.ly/AddressingHolidayCards