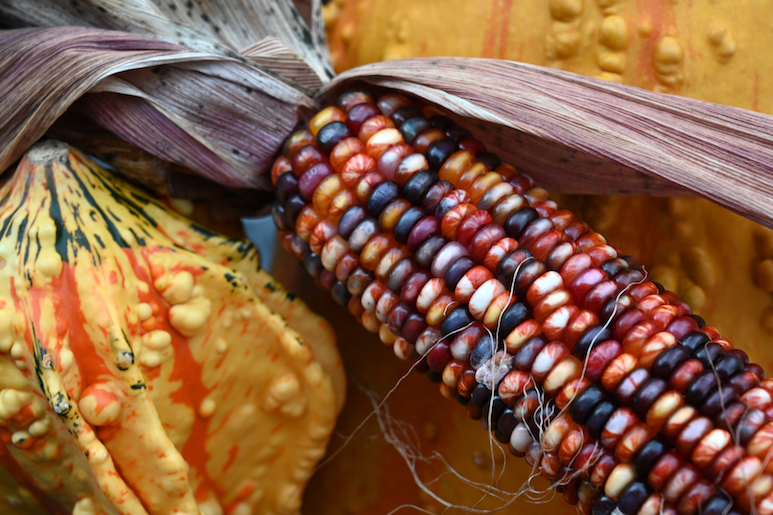 The Friendsgiving recipe: Keep it simple. Have fun. Sit where you please. (Skip Dickstein)

THE BRAIN GAIN: Big brains drove innovation and the Upstate New York manufacturing economy to historic heights for a century. But then educated young adults began leaving the region for opportunities elsewhere.  Brain drain, they called it. Now, there are signs of a turnaround. The Capital Region has the state’s highest growth rates in adults over 25 with bachelor’s and associate’s degrees and the state’s third highest growth rate in people with master’s degrees. Higher education, health care and high-tech are driving the gain. We’re feeling smarter already. http://bit.ly/CapitalRegionBrainGain

EEYORE, WOULD YOU MOVE HERE? Are small communities doing themselves a disservice by buying into the defeatist narrative that their best years are behind them? A University of Minnesota researcher says most Americans prefer a small or rural community and a historic demographic shift over the next 20 years may create opportunities for them to move there. Three-quarters of owner-occupied homes will change hands as baby boomers sell. Young people will likely buy those homes if they can also find a local business to acquire or join. http://bit.ly/RuralHousingInterestGrowing

BE THE CHANGE: Keri Courtright has been a custodian at Syracuse University for 13 years. She’s handled messes you’d hate to face. Each day, she transforms ugly and unappealing into sparkling and attractive. Lately, she’s encountered a repellent mess that resists elbow-grease: A wave of hateful, angry, racist graffiti. Keri is using some innovative tools to dispatch the hate and restore the kindness. http://bit.ly/SUJanitorFightingHate

WE GATHER TO GIVE THANKS AND ARGUE: So those wine-fueled family arguments at your Thanksgiving Dinner table? They go way back. The Huff Post ruffled feathers a few weeks ago when it called for canceling Thanksgiving to save the planet. But the truth is we’ve been fighting over this holiday forever. We can’t agree on who threw the first one, where or why, nor who was invited. When Congress first took up the notion of a national holiday, battle lines were drawn over whether the authority to issue the declaration should rest with the President or each of the Governors. And what about the holiday’s religious theme? And of course: Dressing or stuffing?  More tryptophan, please.

A BIRD IN THE HAND IS WORTH MORE IN THE SKY: Since 1970, bird populations in North America have dropped 29 percent. That’s a loss of 3 billion birds — one in four, scientists say. If you’re interested in human health, that should get your attention. Scientists have documented this decline through a collaboration with amateur bird watchers and concerned citizens who conduct annual bird counts. The Audubon Society’s annual Christmas Bird Count in the Lake George area is Dec. 14. http://bit.ly/ASignficantDeclineInBirds 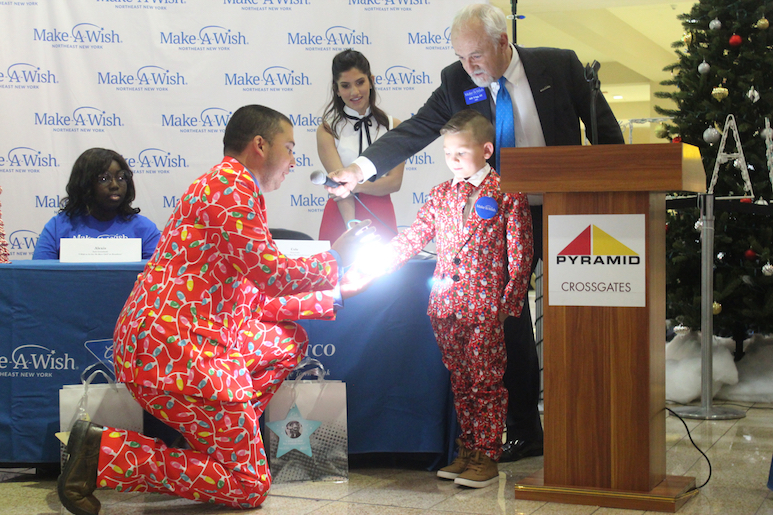 THE SEASON OF LIGHT: Young Cole Brown of Glens Falls knows how to light up a room. He’s 7 and one of eight Make-a-Wish kids who serve as ambassadors for the Annual Make-a-Wish Northeast New York Holiday Campaign. He was chosen to hit the switch on the holiday lights at the kickoff at Crossgates Mall in Guilderland. Last year, the campaign raised enough funds to grant 20 wishes for local children with critical illnesses. To include Make-A-Wish in your holiday giving, visit https://neny.wish.org/

THE DOWNHILL LOWDOWN: A couple guys from California who say they do nothing but ski, surf, mountain bike and travel started snowbrains.com to keep their friends plugged into the coolest places to have fun. They’ve just published “Why You Must Ski the East,” naming the East’s nine best ski resorts, including West Mountain in Queensbury (“this is what skiing used to be like”) and Whiteface Mountain in Wilmington. (“a true skier’s mountain”). http://bit.ly/BestEastCoastSkiResorts

NOT IN KANSAS ANYMORE: She’s the granddaughter of Mervyn LeRoy, the MGM boss who took a chance on “The Wizard of Oz.’’ She’s the great granddaughter of Warner Brothers’ Jack Warner, the Hollywood mogul who outlasted all of his peers. Her parents ran Tavern on the Green and the Russian Tea Room in New York. She a restauranteur and event planner who spent weekends in the Hudson Valley riding horses. Now she’s converted a horse farm in Saugerties into a wedding and events venue. Welcome to Oz. Oz Farm, that is. http://bit.ly/TheOzFarmLife

WHAT WE COULD LEARN: Perhaps the greatest gift Korean parents give their children is nunchi. It’s the ability to read people and sense things, to read a room, to heed that quiet voice in your head, to step back and listen deeply. We’d call it emotional intelligence. A well-honed nunchi can help you choose the right partner in life or business, shine at work, protect you against those who mean you harm, even reduce your social anxiety. Korean parents teach their kids about nunchi starting at 3. http://bit.ly/KoreaNunchiSuccess

WHEN OPIOIDS COME HOME: She was a young prosecutor handling drug cases and thought she knew all about addiction. Then came the awful phone call from her mom and sister. It was time, they decided, to tell her they were getting high together. They were addicted. They were buying the drugs from neighbors who were intentionally addicting people in their rural community. North Country Public Radio’s Brian Mann brought the story of to a national audience. http://bit.ly/AProsecutorFightsOpiodsAtHome

MUSIC TO OUR YEARS: You’ve had the experience sitting in a darkened amphitheater as music transported you to another place? Maybe it was the music that opened your ears, opened your mind, changed your life?   New research shows there’s something to that. http://bit.ly/TheBenefitsOfMusic
And while we’re talking about the power of music, the Grammy Award-winning Albany Symphony has just been nominated for two more Grammys. That’s five career nominations for conductor David Alan Miller and four for the ASO. http://bit.ly/GrammyNominatedASO

EDWARD WHO? Remember Edward Everett? Neither did we. He was the other speaker at Gettysburg, the well-educated, widely hailed, long-winded former president of Harvard, who had the misfortune to share the dais with President Lincoln. http://bit.ly/EdwardEverettsGettysburg

THE MUSEUM OF SERVICE AND SACRIFICE: The Purple Heart is the oldest award the U.S. military still bestows. It is given in the name of the President of the United States to any member of the U.S. Armed Forces who is wounded or killed in action or dies after being wounded. The Award traces its history to Gen. George Washington who established it in 1782 at Newburgh, N.Y., where he lived during the final year of the Revolution. With too little public notice, the National Purple Heart Hall of Honor in New Windsor is the nation’s monument to the service and sacrifice of 1.8 million Purple Heart recipients. The Hall will be closed for the next year as it undergoes a $17-million expansion to increase its space. But when it reopens, go see it. http://bit.ly/PurpleHeartHallOfHonor

A CARGO OF JOY: Their rumbling, lurching rail cars are a sparkling string of holiday lights rolling through the night. For more than 20 years, Canadian Pacific has dispatched holiday trains to communities throughout the United States and Canada. Their cargo is good will and entertainment – with a serious purpose. CP uses the holiday event to collect food and generate contributions to food banks that serve the communities through which its trains roll. Two trains head out from Montreal Nov. 25 and will stop in the Capital Region Nov. 26 and 27. http://bit.ly/CPHolidayTrainIsComing

THE TIMES AND TAXES: The New York Times has been on a campaign to drum up political support for higher federal tax rates on American corporations. Its stories about corporations paying zero tax whip up good old-fashioned resentment in a polarized nation and sometimes leave the false impression that fully proper corporate tax avoidance strategies are, in fact, illegal. In April, The Times focused on Amazon. Last week it turned to Fed Ex. The companies are fighting back with a few jabs of their own. Say, how much does the Times pay in federal taxes?

THE TIMES IT IS A CHANGIN’:  Speaking of The Times: Former Timesman Gay Talese published “The Kingdom and The Power” in 1969, and ever since (and probably before), The New York Times has been the subject of the kind of fascinated scrutiny and water-cooler whispers that powerful institutions like the Vatican get. For the latest in Timesology, we turn to the crosstown upstart, BuzzFeed, whose editor Ben Smith has the morning line on the coming race to succeed Times Executive Editor Dean Baquet. http://bit.ly/TheInternalContestAtTheTimes

‘’In no other place and at no other time has the experiment of government of the people, by the people, for the people been tried on so vast a scale as here in our own country in the opening years of the 20th Century. Failure would not only be a dreadful thing for us, but a dreadful thing for all mankind, because it would mean loss of hope for all who believe in the power and the righteousness of liberty. Therefore, in thanking God for the mercies extended to us in the past, we beseech Him that He may not withhold them in the future, and that our hearts may be roused to war steadfastly for good and against all the forces of evil, public and private. We pray for strength, and light, so that in the coming years we may with cleanliness, fearlessness, and wisdom, do our allotted work on the Earth in such manner as to show that we are not altogether unworthy of the blessings we have received …’’

THE EDUCATION OF STELLA: When Stella wants to eat, she says so.  Same when she wants to cuddle or go outside or play with the ball. Meet the two-month old Catahoula/Blue Heeler puppy whose speech pathologist Mom has taught her to communicate. http://bit.ly/ADogsSpeech