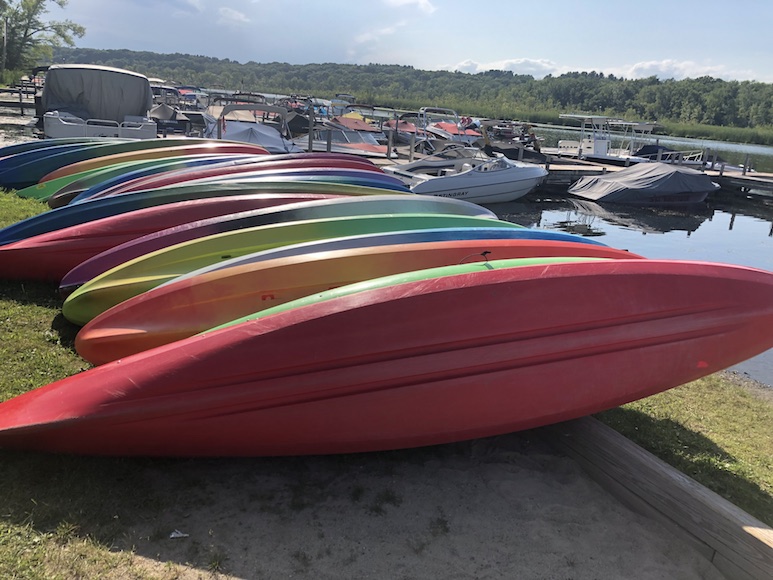 Quit the yakety yak. Read this later. The kayaks are ready at the Kayak Shak on Saratoga Lake.

UPSTATE NEW YORK FIGHTS EBOLA: Regeneron, the Tarrytown-based pharmaceutical manufacturer with a major facility in East Greenbush, may have found a cure for Ebola, raising the prospect that the killer epidemics can be stopped or contained. http://bit.ly/RegeneronsEbolaCure

FINCH AND FRENCH: Finch Paper has been a treasured cornerstone of the economic, cultural and civic life of Upstate New York since its establishment in 1865. Last week, it acquired French Paper of Niles, Michigan, established in 1871 and one of the last American, family-run paper mills. http://bit.ly/FinchPaperFrenchPaper

MIRROR, MIRROR, FAIREST OF ALL: Travel industry experts empaneled by USA TODAY name the Mirror Lake Inn in Lake Placid #1 Lakefront Resort in America and the #3 overall waterfront resort in the nation. And these are not the first national honors for the MLI. http://bit.ly/MirrorLakeInnHonors

THE LITTLE ENGINE THAT DID: In 1904, when William West Durant built the shortest standard-gauge rail line in the world to carry customers from remote Raquette Lake to the hotels around Blue Mountain Lake, he did more than launch the modern Adirondack tourism industry. He inspired the founder of one of its greatest cultural institutions. Pat Gormley visits the modern Adirondack Experience and takes us back to its roots in this week’s The Adirondacks You Don’t Know.

COULD BE A COOL NIGHT:  Howe Caverns in rural Schoharie County west of Albany is the largest cave open to the public in the Northeast and the second most-visited natural  attraction in New York State after Niagara Falls. And they’d like to see you on Sept. 14. Completely naked. http://bit.ly/HoweCavernsFullMoon

WORLD’S SMARTEST LAKE: The Weather Channel does a deep dive on the amazing Jefferson Project at Lake George, a partnership of the FUND for Lake George, RPI and IBM, which has almost 500 sensors collecting 25GB of data every day from the water, the tributaries that feed the lake and the air above it, including wind and current speed and direction, temperature, precipitation, pH, salinity, nutrient and oxygen levels, micro-organisms, and more. The data populate models that predict weather, runoff, circulation and pollution in the lake with unprecedented precision. http://bit.ly/ForecastingLakeGeorge

HONEY, YOU TAKE THE SHOT: Fresh off a fight with his wife Florence at their cabin on Hurricane Mountain, Hank McCoy spotted something in the woods far too large to be a bear. McCoy rushed to grab his rifle but when he came outside decided his wife was a better shot … no, no, no, he decided his gun was no match for the ginormous beast threatening their home. McCoy was the state’s fire spotter in the wooden tower on Hurricane Mountain, which turns 100 this summer. http://bit.ly/HurricaneMtnAnniversary

SUCCESS OF SUCCESSION: The HBO series “Succession,” shot in Albany, Lake Placid and Queensbury a few months ago, is the behind-the-scenes story of the wealthy family’s outrageous struggle maintain control of their media mogul father’s empire — and it’s a ratings winner. Its second season premiered with a series-high 1.1 million viewers. http://bit.ly/SuccessionShowSuccess

GROWN IN THE ADIRONDACKS: In the delightful memoir The Dirty Life, a young New York City writer travels to Essex County in the Adirondacks to interview a young farmer, they fall in love and set off on the romantic adventure of trying to grow everything their community needs. They are not alone: Essex County is becoming the Adirondacks agricultural hotbed, and about a third of the farmers are young beginners. They’re supporting the burgeoning local food movement and preserving open space. But challenges remain. http://bit.ly/AdkParkFarmers

THE WORLD OF MR. KENT: On his death, The New York Times declared Rockwell Kent “a thoughtful, troublesome, profoundly independent, odd and kind man.” He was all that and a painter, illustrator, author, and navigator, too. Plus, a transcendentalist, political activist, and avowed Socialist. And the illustrator of the literary classics Moby Dick and The Canterbury Tales. And, with all that, he was a devoted Adirondacker as well who drew inspiration from his farm Asgaard in Au Sable Forks (go see it). This summer, a new documentary on Rockwell Kent is out. http://bit.ly/RockwellKentDocumentary

NIAGARA’S SIBLING: It’s larger and at times more powerful than the American side of Niagara Falls, yet occasionally as dry as Argyle. Its name derives from a phrase for “ship-wrecked canoe,” oddly apt for the roiled political waters there lately.  The Iroquois believed “The Great Peacemaker” somehow survived a surely fatal plunge there. And, no, Coho Salmon are not native there. Meet the hidden natural gem of Cohoes. http://bit.ly/CohoesFalls 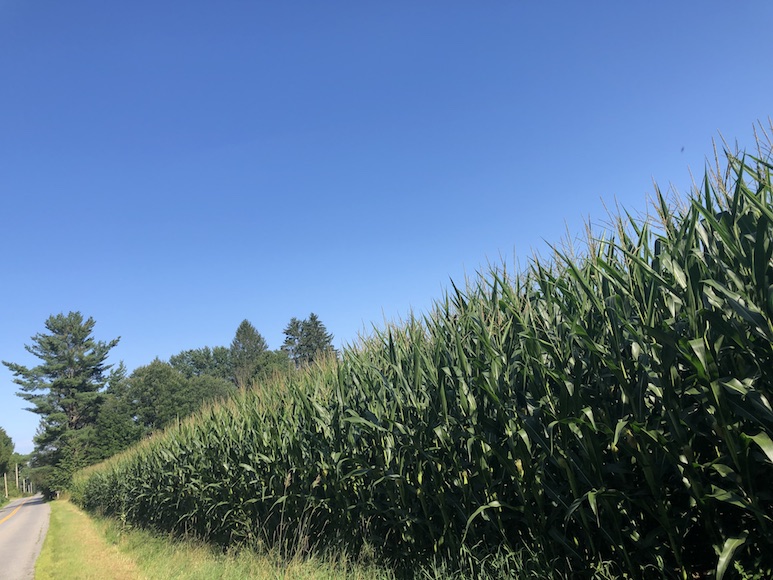 See if you can find a path to the many corn mazes throughout the Adirondack and Capital Region.

WHAT SWEEET AND SAVORY PEAKS: Keep your hiking and biking. Hang up your kayak. If you’re vacationing in the Adirondacks this summer, make time to savor the local cheese and local beer, the bluesberry sweets, and the creamiest soft ice cream ever to fill a cone. Yes, savor the guilty pleasures. http://bit.ly/AdkFoodiePleasures

HANDLE BAR HOSPITALITY: Bicyclists are big wheels for the hospitality business. They bring business and life everywhere they go, and Glens Falls is hosting a community discussion of how to pump up the hometown welcome. http://bit.ly/BicyclistsBringingBusiness

WALTER CAMP’S GAME: College football began on November 6, 1869, when Rutgers and Princeton played what is believed to be the first college football game. More than a decade later, a great rugby player from Yale, Walter Camp, pioneered rules changes that transformed the game. As college football turns 150, the media are celebrating. CBS has picked the All-American team of all time, and Sports Illustrated has compiled the 150 best-ever photos.

NOT-SO-WARM WELCOME? Despite two heat waves, Europe is awash in tourists this summer. Some top destinations are confronted with an influx that has exploded beyond what they can handle. Even in places where the local economy is largely dependent on tourism, resistance is growing — and there are now efforts to keep people away. http://bit.ly/EuropeNotSoHotForTourists

GET BEYOND THE GUILT: How do working parents do it? How do you look at the mountain of practical daily challenges at work and at home and somehow find a happy way? Some tips on how to thrive — and keep your sanity. http://bit.ly/ThriveAsAWorkingParent

THE POWER OF EMOTION: Selling an innovative idea inside your organization requires rational arguments, of course. So, think like a marketer: Tap into your boss’ subconscious and unleash the power of positive emotional associations. http://bit.ly/WorkplaceMarketing

SAVOR THE MOMENT: Why do driven people so often achieve a big goal only to descend into joyless worry about when the sky will fall? How to enjoy nice moments without worry. http://bit.ly/SavoringTheMoment

TO THEIR DEN: Patience and Fortitude have a date with the bathtub this fall. The stately lions that guard the New York Public on Fifth Avenue are in need a good scrub. http://bit.ly/LibraryLionsBath

TEACHERS REMEMBER; KIDS DO, TOO: When he was found by police wandering alone on a dark highway, the 30-year-old man with special needs could remember only the name of a middle school teacher of many years ago. She remembered, him too. http://bit.ly/TeachersGiftToFormerStudent

SHELL OF AN IDEA: West Lafayette, Indiana, is a safer place today, thanks to eight-year-old Jack Weitbrock. Turtle crossing signs have been erected, which good news for the cousins of New York State’s official reptile. http://bit.ly/8YearOldTurtleProtector

READ THIS QUICK: In this hurry-up world, who has four hours to watch a baseball game or play a round of golf?  Maybe that’s the point. http://bit.ly/TheSlownessOfSports

Be around the light bringers, the magic makers, the world shifters, the game shakers.
They challenge you, break you open, uplift and expand you.
They don't let you play small with your life.
These heartbeats are your people.
These people are your tribe.

THANK YOU to our contributors: John Brodt, Bill Richmond, Bill Callen, Lisa Fenwick, Colleen Potter and Tina Suhocki. Special thanks to our Behan Communications intern extraordinaire Nolan Murphy, a faithful Facing Out contributor, who is returning to Quinnipiac University for his senior year. Nolan, you make us proud!