$500,000 gift from entrepreneurs Brien and Mike Moran will transform the village’s longtime recreational and social destination; to be renamed Moran-Derby Park 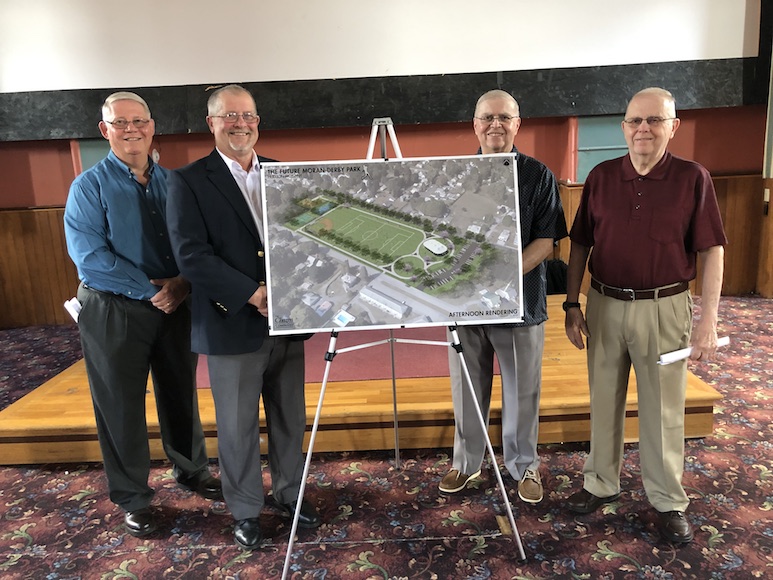 Longtime Hudson Falls entrepreneurs Mike and Brian Moran (at right of easel) announced
a $500,000 gift to help the village transform Derby Park into a vibrant recreation and
community space. Spearheading the revitalization effort have been (at left)
Deputy Mayor Bob Cook and Mayor John Barton.

HUDSON FALLS — The Village of Hudson Falls today announced another major step forward in its ongoing community revitalization  — unveiling plans for a $1.1 million refurbishment of Derby Park, the six-acre expanse in the southeast corner of the Village where generations of families from throughout the region have gathered for recreational and social activities.

Fueling the excitement, two Hudson Falls natives and longtime local businessmen, brothers Brien and Mike Moran, announced they will make a $500,000 donation to kick-off a community-wide capital campaign. Once the transformation is complete, the revitalized park will be re-named Moran-Derby Park.

“Time and again over the years, Brien and Mike Moran have stepped up to the plate to make Hudson Falls a better place to live. This time they’ve hit a grand slam,” said Mayor John Barton. “Through their generosity, this park — which has seen some hard times in recent years — will once again become a tremendous recreational resource and great source of pride for our community.”

“Hudson Falls is on the move, and this can be one of the biggest things to help continue the momentum,” said Mike Moran who, along with his brother, took over ownership of their parents’ then-20-year-old sporting goods store in Downtown Hudson Falls in 1970 and grew it into Moran’s World of Sporting Goods, the largest sporting goods superstore in the Capital Region, by the early 1980s. “I truly believe that Derby Park can once again become a community gathering place. Not just an athletic complex, but a place that offers something for everyone.”

“Brien and I have been very fortunate in our lives,” Mr. Moran continued. “The people of Hudson Falls, the Town of Kingsbury, and all over the area, have been very good to us and our businesses. We continue to have great pride in our hometown, and we saw this project as an opportunity for us to give back in a meaningful and enduring way.”

The refurbishment plans for Moran Derby Park, which are scheduled to be completed in 2021, include:

• Three pickleball courts, to help meet the demand for this increasingly popular game;

The Village’s plans also include all-new lighting; new, more attractive fencing along the entire perimeter of the park; a new irrigation system and landscaping; and a complete renovation of the restrooms and clubhouse building.

The Village is working with The Chazen Companies engineering firm, which designed the project, to identify potential sources of grant funding to complement the Morans’ gift, and will be launching a community capital campaign, as well. Anyone interested in serving on a fundraising committee is asked to contact the Mayor’s Office at Village Hall. Anyone wishing to contribute to the campaign can do so by sending a check payable to Derby Park Fund to Glens Falls National Bank, 3019 Rt. 4, Hudson Falls, NY 12839. An online fundraising site will be established in the near future.

Derby Park was donated to the Village in 1958 by Central School District No. 1 of the Towns of Kingsbury, Fort Edward, Fort Ann, Argyle, Moreau and Queensbury. For generations of families from Hudson Falls and across the region, the park was a recreational and social destination, home to softball leagues and semi-pro football, summer playground programs and high school basketball leagues, ice skating and community festivals.

In recent years, activity at the park has slowed dramatically, as organized softball and basketball leagues disbanded, leaving the Village’s popular youth soccer program as the only regular activity.

As the plans began to take shape, Mike Moran informed the group that he and his brother would like to jumpstart the capital campaign with their generous gift.

“All of a sudden, with the Morans’ commitment, this project went from plans on paper to something that is truly going to happen,” said Trustee Cook. “We can’t thank them enough for their ideas, enthusiasm and generosity. They are the epitome of a hometown success story, but most impressive is the way they have shared their success with the community.”

“It often seems that communities with a high quality recreational park enjoy a higher quality of life in general. Moran-Derby Park can be a centerpiece,” said Town of Kingsbury Supervisor Dana Hogan. “I can’t say enough about the Moran brothers’ commitment to our community through the years. Their gift to the school district for the high school track helped provide us with one of the best athletic facilities in the region, and now they’re helping give us another tremendous community asset.”

The brothers took over ownership of the business in 1970 and, over the next three decades, grew the business significantly, first expanding across the street from the sporting goods store with the opening of their Pedals & Wheels Bike Shop, and then combining and moving both stores to the northern end of the village in 1976, where they transformed a vacant Grand Union supermarket building into the Capital Region’s first sporting goods superstore, Moran’s World of Sporting Goods, and become one of the region’s leading providers of bicycle repair and service. In 1989, they sold the store to concentrate on other interests, but then purchased it back in 1993 and operated under the name B&M Sporting Goods until 1999 when competition from national big-box retailers became too much.

While operating the sporting goods store, the brothers also branched out into a variety of other businesses, including Henry G’s restaurant; the Park House Hotel and Banquet facility; Moran’s Plaza; Treats & More ice cream shop; and Pack & Mail shipping. They also purchased and transformed a former funeral home at 51 Main St. into apartments and constructed nine luxury town houses on the property, calling the project Moran’s Victorian Manor. While they have sold or closed all of these businesses, the Morans continue to be active members of the Hudson Falls-Kingsbury business community through their Moran Enterprises property rental business.