When you hear that a small town in Upstate New York is taking on the rapidly expanding, enigmatic Bitcoin, you take notice; in fact, the tech, finance and municipal worlds are taking notice, too, in part because Plattsburgh, a city of fewer than 20,000, isn’t the underdog; it’s a poised and powerful participant content with being underestimated.

The Plattsburgh City Council in March enacted the first Bitcoin mining ban in the United States. It’s not a permanent ban but an 18-month pause to give city officials time to work with both citizens and Bitcoin miners to find a solution to the many issues raised by this digital digging.

The question on everyone’s mind: Why Plattsburgh?

Bitcoin is as an intriguing a puzzle to Plattsburgh as cryptocurrency is to markets. On the one hand, Plattsburgh might stand to benefit from Bitcoin mining as long as:

Plattsburgh’s moratorium affects only new Bitcoin operations; it will not affect companies such as Coinmint — the largest operation with at least two sites in Plattsburgh — and a few smaller operations, including Plattsburgh BTC — run by 27-year-old David Bowman — and a company founded by 18-year-old Ryan Brienza that are already mining in the city.

Bowman started his company to help finance his college education at SUNY Plattsburgh, but he has continued the business for a different reason. “I stuck around because of the philosophy and seeing all of the potential blockchain technology has and I love that it takes some centralized power from banks and decentralizes it,” he says. “I see Bitcoin as an opportunity to empower the individual financially since cryptocurrencies are generally designed to deflate over time instead of inflate like fiat currency.” 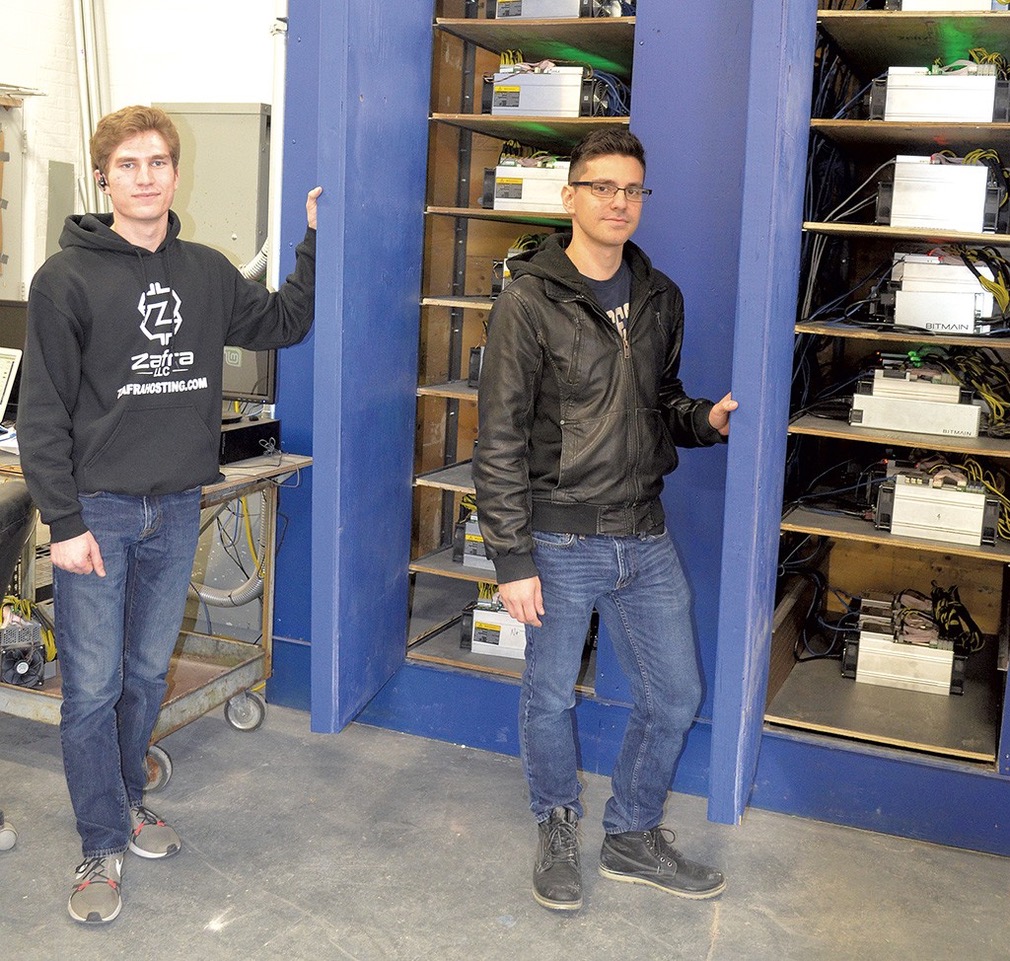 THE POWER OF PLATTSBURGH

What makes Plattsburgh attractive to Bitcoin miners is its cheap, abundant electricity, reputed to be the cheapest power in the world. In the 1950s, power-generating dams were constructed on the St. Lawrence Seaway, guaranteeing Plattsburgh a fixed supply of cheap electricity.

“[Since] very few municipalities have a quota like we do, we are in a very unique situation to manage the amount of power we use,” Plattsburgh Mayor Colin Read says. “Hence, we have to be very cognizant of how we use it, so we take a very close look at power usage, wastage, sustainability, etc. If we go over the quota, our power costs us much more; most communities can buy more power at the going rate, which is much higher than our cost.”

Plattsburgh’s biggest mining operation used approximately 10 percent of the city’s total power budget in January and February.  “This issue of rapid and exponential Bitcoin expansion is new to municipalities around the world,” Read says. “The very high speculative price of Bitcoin last year further spurred the demand for electricity.”

When Plattsburgh exceeded its power allotment in January, the city was forced to purchase electricity on the open market. This increased residential electric bills by $50 or more. The monthly bill for one industrial customer reportedly rose by more than $20,000. Some worried about the loss of inexpensive power forever.

Plattsburgh BTC’s Bowman cautions that a deeper analysis of the reasons for the overages is needed.  “There is a lot to be done to understand the impact of mining on Plattsburgh and the ultimate goal is for it to have a net positive impact on the community,” he said.

Bitcoin “mining” is a technique used to validate bitcoin transactions on high-powered computers.

The servers are used to calculate the solution to one of a series of intricate problems. When a computer gets the answer, it currently receives 12.5 newly minted coins. The most successful miners tend to use a large network of mining rigs or complexes of servers. Electricity use isn’t the only issue. Bitcoin mining generates a great deal of surplus heat and significant noise.

“A Bitcoin machine is smaller than a shoebox and consumes about as much energy and creates about as much heat as a space-heater you might use at home,” Read explains. “A large mining operation can cram 5,000 or 10,000 such machines in one room. When operating, each puts out about 75 decibels and a whole room of them is very loud.”

The excess heat is both a problem and an opportunity. “The heat generated is about 100 to 1,000 times more than what a room can safely handle, and ambient temperatures, even with the extensive exhaust fans can approach 140 degrees,” Read says.

Bitcoin mining dissipates heat to the atmosphere. “If we could only figure out how to recapture that heat to warm gyms and civic centers, we could turn their electric use down as we turn the Bitcoin machines on,” Read says. “Imagine heating a large indoor tomato hothouse with this waste heat. Now, that would allow us to turn this liability into an asset.”

Technological advancements could make this an actuality. A French startup, Quarnot, recently unveiled a space heater that could make a difference. The QC-1 is the world’s first crypto-heater, allowing one to earn cryptocurrency while heating.

How Bitcoin affects Plattsburgh’s overall economy also remains to be seen.  Plattsburgh’s goal has been to use its inexpensive power to lure job-creating industries or support expansion of existing industries.  “They [Bitcoin miners] consume twice as much power as our second most intensive industry — the Mold-Rite Plastics [bottle-cap maker], but while Mold-Rite employs almost 500 people, a Bitcoin operation might employ five people,” Read says. “This means we have no power to sell a Mold-Rite if they wanted to expand.”

Plattsburgh knows how to overcome adversity. It weathered the closing of the Plattsburgh Air Force Base in 1995 and has successfully repositioned itself.

“More than 20 years ago, the Plattsburgh area recognized its strategic position as a U.S. suburb of Montreal and as a key gateway and service hub in the emerging Quebec-New York Corridor,” Chamber of Commerce President Garry Douglas says. “We have strategically focused each and every day since then on the broadening and deepening of connectivity with Quebec in all forms. There are now more than 100 physical locations of Canadian-based businesses in the Plattsburgh region, and we estimate that 15 percent of the Clinton County workforce is now employed by a Canadian or border-related employer on this side of the border.”

The city was ranked by FDI (Foreign Direct Investment) Magazine, a branch of the Financial Times, as one of the Top 10 Micro American Cities of the Future Overall for 2017-2018 and came in third in the category of economic potential. For six years running, Plattsburgh has been recognized as one of the Top 10 Cities of the Future in the micropolitan category, for all of North and South America.

“In addition to an overall focus on (foreign direct investment) and commerce linked with Quebec,” Douglas says, “we further targeted the Transportation Equipment and Aerospace sector for development of a three-pronged international cluster -- rail, road and aerospace. We now have more than 40 TE&A manufacturers in the region employing more than 8,300 people and the cluster is growing.”

Douglas said Plattsburgh will continue to grow as a place where people want to live, work and invest, but he doesn’t believe that Bitcoin mining will benefit the development of the community. “Their high power usage harms actual rates for current users by maxing capacity, and interferes with the availability of cheap power for job-producing enterprises,” he says. “These operations simply do not bring significant jobs. There may be other areas desperate for any type of investment, but the Plattsburgh region is not.”

“I named my company after the city because I was hoping to draw in some investment and get the word out,” Bowman says. “I think it could bring more young people to the area and help spur innovation in blockchain technology. Potentially, heat from servers could be repurposed during the winter. Unfortunately, cryptocurrency is not well understood now, but I think it offers some amazing advancements for the future that could bring in a lot of opportunity to Upstate New York as the technology matures.”

Bowman believes the moratorium will “give crypto miners and the city time to sort out some ideas to make sure mining operations aren’t being subsidized by residents and ideally benefit the community as well. Half the problem is that cryptocurrency is an immature technology and many residents weren't even aware that it was happening or even what it was.”

Brienza, who graduated from high school in 2017 and started his company to pay college tuition, says, “I think Plattsburgh could benefit greatly from allowing cryptocurrency mining in the city. We have been working on many solutions … that would generate millions of dollars over the next few years…My company has developed an all-in-one mining box for miners that can recapture the heat and is an easy solution for new mining farms. We are trying to sell these boxes to miners, which would create some manufacturing jobs in the city as well.”

PLAN FOR THE FUTURE

On the same day Plattsburgh enacted its moratorium, the state Public Service Commission said the rules were needed “to prevent local electricity prices for existing residential and business customers from skyrocketing.”

Read says, “We hope that our petitioning of the Public Service Commission will allow us to charge the Bitcoin processors the differential amount rather than all our ratepayers. Next, we need to use redesigned building and safety codes to solve the other nuisances and establish an economic development plan that involves some mix of cryptocurrency but also a heavier dose of job creation.”

Molly Congdon is a writer for Behan Communications. Our firm specializes in helping clients with energy, environmental and economic development projects in New York and other states.