By Pat Gormley
Writer and Artist 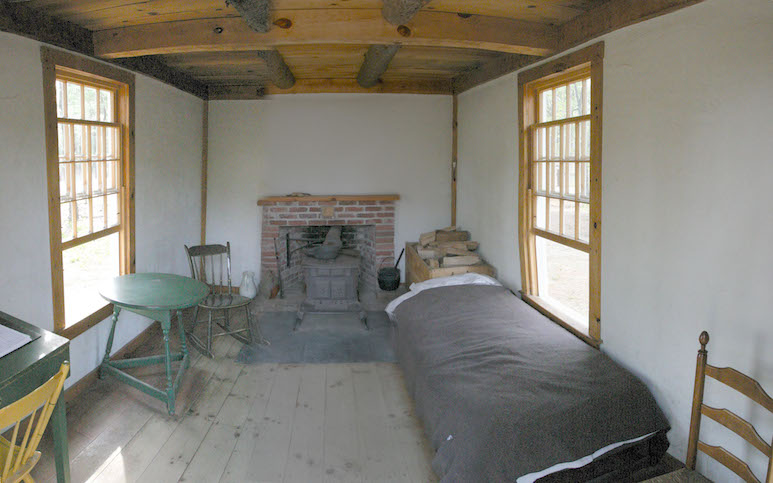 Hermits have lived on the fringes of societies for thousands of years; they were the first true outliers. A traditional hermit is defined as a person who chooses to live a life of solitude in order to find a spiritual connection to a higher power or to defy authority. This is a short history of Noah John Rondeau, the most celebrated hermit of the Adirondacks. 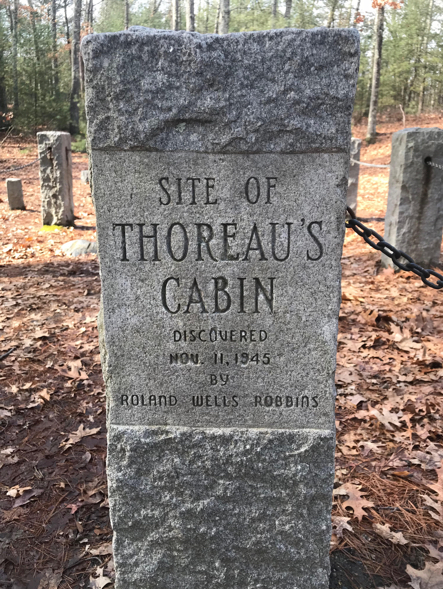 Marker for Thoreau's cabin at Walden Pond (photo by author)

In 1845, American writer, naturalist, and philosopher Henry David Thoreau established a “hermitage” on the shore of Walden Pond in Concord, Massachusetts. In all, he spent over two years in his one-room cabin observing, thinking, and writing. Most of his time was spent pondering the natural world and the human condition through the lens of Transcendentalism. Thoreau’s journaling culminated in the publishing of his influential treatise Walden; or, Life in the Woods. This self-proclaimed sojourner may not have all the credentials for a hermit, but his unencumbered days on Walden Pond yielded a timeless, contemplative classic.

Jump ahead to 1913, and a man named Noah John Rondeau gathered supplies for his retreat into some of the most remote country in the Adirondacks Mountains. His provisions included: a double-bladed axe, a rifle, traps, and other essentials, including a copy of Walden.  Using the lumber from an abandoned logging camp and trees from the site, Noah built two main structures and established Cold River City. Rondeau named himself mayor and proudly posted a sign indicating his “city” in the woods had a population 1, and he planned to keep it that way. 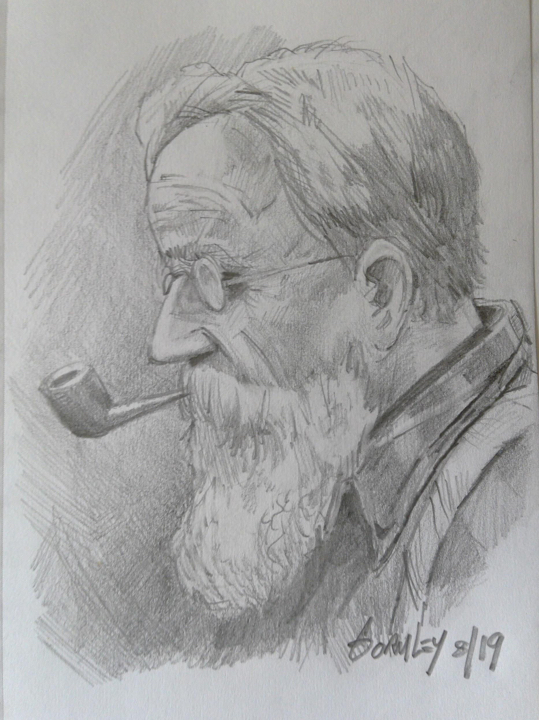 Portrait of Rondeau (drawing by author)

For 14 miles, the Cold River stretches through the heart of the High Peaks Wilderness. To the north is the towering Seward Range. (The mountains were named after William H. Seward, the former New York Governor, U.S. Senator, and President Lincoln’s Secretary of State who brokered the purchase of Alaska from Russia.) To the south, the Santanoni Range looms. The river joins the meandering Raquette River near the north end of Long Lake in Hamilton County.

Rondeau was born in 1883 near Ausable Forks, a town bisected by the Clinton and Essex county line. By all accounts, the young Noah had a difficult childhood marked by poverty, strict religious practices, and an abusive father--a combination of factors that led Noah to run away several times.  His formal education stopped after the eighth grade, however, Noah believed in the value of learning. He was curious and an avid reader with a particular interest in astronomy and philosophy.

Having worked as a barber in Lake Placid, the aspiring hermit had to learn the ways of the north woods. While living in Corey’s on the Raquette River, an Abenaki Indian named Daniel Emmett taught Rondeau how to survive in the woods. One occupation that fit his newly-acquired knowledge and his colorful personality was guiding. In the spring, summer and fall, Rondeau made a living as a guide leading patrons or “sports” on hunting, fishing, and hiking excursions. Since there was no guiding in the winter, Noah would hike the thirteen miles from Corey’s to his hermitage in Cold River.

In 1929, Noah Rondeau lived year round in Cold River City, and his reputation began to grow. He continued to guide paying customers and to entertain visitors who travelled by land or boat to meet the bearded little man dressed in deerskins. He would amuse his guests, especially hikers from The Adirondack Mountain Club, by telling poignant stories and sharing his views of the world. Sometimes he would play his fiddle for them. In his solitude, Rondeau journaled (some of it was written in the secret code he invented), painted, read, and studied the night sky.

One person, however, was not welcome at the hermitage: the game warden. Rondeau’s disputes with the Conservation Department went on for decades. Although many of the stories have become mountain lore, one is worth retelling. When the game warden allegedly stole a muskrat from one of Noah’s traps, the hermit fired a shot in his direction. A few days later, Rondeau was arrested by the same warden and jailed in Malone for three weeks. He was later acquitted of the charges.

In 1947, Noah Rondeau received an unusual offer. District Forester Bill Perry dropped a note from an airplane asking if Noah to attend a sportsman’s show in New York City. The hermit created a message in the snow with his feet. The answer was “yes.” The next day a helicopter landed, and Noah boarded it. He was about to work for the same Conservation Department that had caused him so much strife. His job was to promote the protection of the Adirondacks, and the work suited him. The Mayor of Cold River City was treated to luxurious hotel accommodations and ate at fine restaurants. Over the next few years, he travelled around the state giving lectures and sitting for interviews for radio and newsreels.

In late November of 1950, Rondeau was forced to leave Cold River after “The Big Blow-Down”, a hurricane that brought over 100-mile-per-hour winds and decimated an estimated 250,000 acres of the Forest Preserve. Large tracts of the High Peaks suffered most of the damage. The entire area of the Cold River was closed for three years because of the forest fire danger from all the toppled trees. (The State of New York approved the supervised harvesting of the downed trees on State Land because of the imminent threat of a large-scale fire. Harvesting timber on State Land is strictly prohibited in the New York State Constitution.) Rondeau gathered all he could carry and said goodbye to his city in the wilderness. He was sixty-seven years old.

Rondeau lived in and around Lake Placid in the 1950s and 60s. He carried on his hermit persona while working at Frontier Town near Schroon Lake. An imitation Cold River City was constructed at The North Pole in Wilmington where he told enduring stories of his four decades in the wilderness. ( It’s no surprise that the white-bearded and good-humored hermit filled in as Santa Claus when needed.) Rondeau’s health began to fail him, and he died in Lake Placid in 1967 at age 84. His cabin is on permanent exhibit at The Adirondack Experience in Blue Mountain Lake. Paul Jamieson, editor of The Adirondack Reader, included these words about Rondeau that could have been used as part of his eulogy:

When he was speaking it seemed as if he was vocalizing
the mystic spirit of the woods...beneath his frolicking humor
there lurked a soul of rare sincerity and worth.

When asked the essential question: Why did you become a hermit? Rondeau’s standard reply was more about practical economics than his political views or some great quest for meaning. In 1929, America was entering The Great Depression, and the Adirondacks were not immune to low wages and high unemployment. Rondeau may have believed that the self-sustaining model was more viable based on what he read in the papers, and so he simply packed his things and went to the woods.

Though neither men may qualify as a conventional hermit, Noah John Rondeau is emblematic of the Adirondack Mountains just as Henry David Thoreau is of New England. Their personal motives differed, however, both can be regarded as people who deliberately immersed themselves in nature to learn what it had to teach and then shared their musings with the outside world. Clearly, Rondeau’s influence on the world was not equivalent to Thoreau’s, but the hermit of Cold River certainly earned his place in the pages of Adirondack history and folklore.

Thank you to these sources: